Home Apps Mobility as a Service: the key to seamless travel chains?

NEW legislation comes into effect in Finland this month, which sets an international precedent for the availability of data on transport services. Through its Act on Transport Services, the government seeks to provide a legal basis for digitalisation and new business models in the transport sector by introducing provisions on the interoperability of data and information systems. This does away with mode-specific regulations on transport service information and provides a level playing field for all operators.The new law will allow Uber to begin operating in Finland, but like every other transport operator in the country, it will need to open its Application Programming Interface (API) and its data. It will also have to allow third party providers to buy and resell Uber rides through their own applications.

The act will be a key enabler for the broader implementation of Mobility as a Service (MaaS), a concept which integrates different transport services including public transport, taxis, car hire, walking, and car, ride or bike-sharing into a single on-demand mobility service. 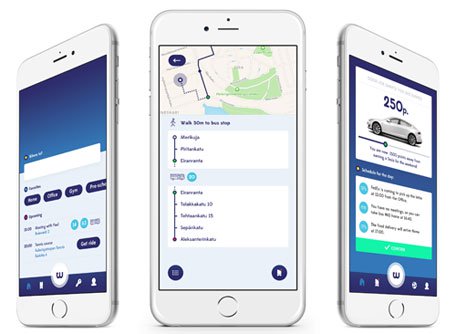 The user accesses MaaS through a single application, which sets out the fastest, greenest, or cheapest route for any given trip with a single payment channel covering all services. As a MaaS subscriber, paper tickets and cash payments become a thing of the past – the mobile phone becomes the user’s “control and command centre” for a world of seamless mobility that is free at the point of use.

As the cradle of the MaaS concept, Finland is creating an ecosystem in which integrated on-demand mobility solutions can thrive. One of the pioneers in the field is MaaS Global, which launched the world’s first MaaS solution, Whim, in its home city of Helsinki at the end of 2016.

“The whole concept of MaaS states that we have to be a good alternative to car ownership, so that means we have to be able to handle any journey door-to-door, within a city, and from city-to-city,” explains MaaS Global co-founder Mr Kaj Pyyhtiä. “The idea is that wherever you want to go, in the city or the countryside, you can get there without having to own a car.”

In Helsinki there’s already evidence that users of the Whim app developed by MaaS Global are leaving their cars at home and turning instead to multi-modal travel, boosting public transport ridership. “Public transport already accounts for 30-40% of trips in the Helsinki region,” Pyyhtiä says. “Within Whim, 84% of trips involve public transport and that’s been on the rise every month. But what’s more, in Finland nobody really uses taxis because they are too expensive, so on average people do one taxi trip per month. Within Whim it’s 4.5. Where does this come from? People are using their cars less, and they are behaving very differently because it’s suddenly possible for them to use alternative forms of mobility. Just by making it possible, simple, and convenient to use the alternatives, people will respond.”

According to guidelines from the MaaS Alliance, the core function of a MaaS ecosystem is to create an “open and dynamic market for the delivery of a user-centric mobility services portfolio through a unique interface,” with many different partners sharing a common principle of delivering a seamless door-to-door mobility experience. For Pyyhtiä, the key word here is “open” – a MaaS ecosystem can only work effectively in a deregulated environment where all players are on equal terms.

“Deregulation helps us. If there’s open market competition, so anyone can work in that field, then that’s good for us,” he says. “Some cities have issued tenders for companies to come in and start operating MaaS. That is the wrong model because it’s going to lead to a natural monopoly. If it’s a city-led MaaS, it’s not going to fulfil the core principle of meeting transport needs outside cities and connecting cities.”

According to Pyyhtiä, a city needs three essential ingredients for MaaS:

Integrating transport operators with API-based platforms into a MaaS ecosystem is relatively straightforward, but in the absence of standards for this process, MaaS Global has begun to create its own documentation. “We believe in open collaboration models, so we’ve put open-source API documents online. If an operator picks it up and complies with that format, we can just pick them up and plug-and-play.”

Pyyhtiä stresses that MaaS is a universal concept, and its open architecture should help it to grow quickly, potentially with spectacular results for public transport.

“MaaS started in Finland 10 years ago, but nobody can own such a thing, and we’ve created something bigger than us,” Pyyhtiä concludes. “What form will it take, what kind of app will it have, that’s a secondary question really. MaaS will happen, and it will fundamentally change the way people move.”