Meet the new bus: not quite the same as the old bus. With echoes of the Latin American colectivo or Israeli sherut but in super-smart vehicles networked by Uber-style apps, on-demand services are popping up in cities around Britain – with the big transport companies unshackling their buses in the hope of driving cars off the roads.

The biggest on-demand experiment yet launched this week in Oxford, where passengers can use an app to summon a minibus to and from any street corner in the eastern half of the city.

At £2.50, the fare is a fraction of a taxi and only slightly more than the normal bus but the PickMeUp service is not limited by routes – although it will stop to pick up more passengers going the same way. With an almost identical scheme, ArrivaClick, launching in Liverpool later this summer, could on-demand bus services lure car owners onboard, cutting congestion and pollution?

Speaking at Oxford’s science park, on the fringe of the city, he says: “This is classic territory where it’s tricky for a traditional bus service to deliver. But with the new technology you can identify where people are and provide for them in a way you couldn’t before.”

The city’s geography means that while plenty of buses use routes in and out of the centre, many people’s journeys are orbital. Thousands work in business and science parks on the periphery, where hospitals and shopping centres are also located, and more than 90% travel by car.

Brown says: “If you don’t own a car, how do you get there? If it’s your first job you’re pretty stuffed. And if people can’t get to work and jobs that leads to another raft of social issues.”

PickMeUp is looking to attract the well-heeled professional, too: the six low-emission Mercedes-Benz minibuses have free wifi, USB charging points and comfortable seating for 17, plus wheelchair space.

There is no public subsidy but Go-Ahead has garnered support from employers in the business parks around Oxford’s periphery to encourage staff onboard, to reduce their own problems with car parking and congestion.

Testing the service, the Guardian was notified by the app on schedule, at St Aldates in the city centre, that its vehicle would be on the corner with Speedwell Street, 200 metres away, in two minutes.

No other passengers were onboard but some people had already become regulars, according to the driver, Ryan Palmer.

Having switched from driving double-deckers, he says. “I love it – it’s much more sociable. You get a hello on the normal buses but here you could really get to know the passengers.”

Later, a bus arrived on cue at the science park, driven by Dawn, who enthuses: “I’ve been to places I never knew existed – and down some very narrow streets.”

According to drivers and the firm, the service is proving popular with its 750 early adopters: for many, significantly quicker than other public transport and a lot cheaper than a taxi, with a similar level of convenience.

Fares are planned to become dynamic – and potentially lower – when more people are on onboard but the current £2.50 fare will double for anyone seeking a bespoke ride along routes served by normal buses. “We don’t want to cannibalise our own service,” Brown says. 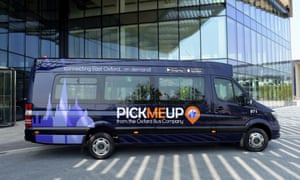 The green shoots of on-demand buses come at a bleak time for many other services. Public subsidy has been squeezed, directly and indirectly, through years of government austerity: central grants to operators have been slashed, while financially stricken councils have stopped supporting routes deemed commercially unviable.

Oxfordshire county council scrapped all bus subsidies in 2016, leading to the immediate disappearance of dozens of routes. Those villages are unlikely to ever provide enough demand for services such as PickMeUp to work, the company concedes.

Phil Southall, the managing director of Oxford Bus Company, says: “It’s not going to solve rural bus problems overnight. But if people want to talk to us …”

Data collated by requests to the app – built by the New York ride-sharing service, Via – can show where demand could potentially allow new, fixed routes to be created.

Stagecoach, which gave a trial to a low-tech, landline version of on-demand buses along a linear route in Fife as far back as 2003, suggested that new technology could make them work in rural areas but would need public subsidy.

It recently experimented with cab-to-bus tickets in Kent, an option First Group is developing with an app for “last-mile” shared taxi rides between homes and bus stops along a main route in Bristol. Other experiments, on linear routes, include CityMapper and Ford’s Chariot in London, and targeted, peak-hour ride-sharing schemes such as Slide in Bristol.

Go-Ahead’s venture has the biggest scale and flexibility to date: almost 2,000 “virtual stops” in its app, operating from 6am to 11pm, to cover work shifts of employers such as TripAdvisor located in the science park.

Also, Brown says: “You have to let passengers know they can stay for the pub [after work] or they won’t use it in the peak.”

On-demand bus trials to date have not been unqualified successes: a scheme in Sydney, Australia, has been attacked as a scandalous waste of money after so far costing an average of A$100 (£56) per trip.

However, Go-Ahead has pledged to run the service for at least a year to see if the firm’s £850,000 investment works. Brown says: “There is high travel demand and this links people for employment and social needs. If it doesn’t work here it won’t work anywhere. Then the car has won.”