Home Apps Private companies want to replace public transport. Should we let them?

Companies like Uber and Citymapper are scrapping for a piece of the mass transit market – with or without the support of public bodies.

The sleek black van seemed a lot like a taxi. After summoning it to my location in central London using my smartphone, I walked a short distance to the pick-up point and clambered in. But then, just as I moved to close the door, a stranger climbed in after me.

She introduced herself as Anna. It was Anna’s third time using Smart Ride, the new service from Citymapper, the route planning app that has branched out to offer its own transport services. Smart Ride uses a fleet of minivans that move around the city on a fixed network, matching up passengers based on pick-up points and destinations. Citymapper calls it “a solution for dynamic shared transportation in cities”. Essentially, it’s a cross between a taxi and a bus.

In other words, Citymapper has its sights set on mass transit. And it’s not alone. The chief executive of Uber, Dara Khosrowshahi, recently announced: “I want to run the bus systems for a city.” Elon Musk, who hopes his Hyperloop concept will one day transport passengers via pneumatic tubes, has described mass transit as “a pain in the ass”. Startups are launching ride-sharing apps, dockless bike hires and responsive bus networks in cities around the world.

It might be working. When Transport for London recently announced that its passenger numbers have fallen, many pointed the finger at Uber. There is little evidence to prove that connection, but when researchers surveyed the residents of seven US cities in 2016, they found a 6% reduction in use of public buses and a 3% reduction in use of light rail after ride-hailing services were introduced. “Current evidence suggests that ride-hailing is pulling more people away from public transit in cities, rather than adding riders,” they said. Greg Lindsay of the NewCities Foundation encapsulates the thinking: “My fear is that Uber is going to lead to a cycle of cataclysmic disinvestment. They will try to siphon off the most profitable customers and leave public transport a rump service.” 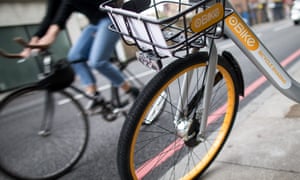 The prospect of private companies challenging or taking over mass transit has raised other concerns. Last year, Uber was stripped of its licence in London because of its lax approach to reporting serious criminal offences and its failure to carry out background checks on drivers. TfL concluded Uber was not “fit and proper” to offer a private taxi hire service. An appeal is ongoing.

Citymapper’s relationship with London’s authorities initially seemed more harmonious – last year the company described TfL as “the most forward-thinking public transport agency in the world” – but now it’s running its Smart Ride service, relations are fraying. It has complained about having to wait weeks for approval to vary the bus routes, and that it had been blocked from using larger vehicles. “Regulation makes it hard to be smart,” the company said in a recent blog post.

TfL says it wants to embrace technology that complements its public transport network. When Ford launched its commuter ride-sharing service, Chariot, in London this year, it applied to operate six routes; TfL granted licences for four. Citymapper applied to operate two bus routes last year and was granted permission for one. It also needed a private hire taxi licence, of the type recently stripped from Uber, which TfL granted, with limits on the types of vehicles that can be used. TfL’s position is that it is open to innovation – not revolution.

Cautious collaboration between public and private seems to be the most common relationship. In 2016, the US Federal Transit Administration awarded $8m (£5.7m) to a series of new projects aimed at integrating new technology into mass transit networks. They include a partnership between Los Angeles County and Lyft to encourage ride-hailing journeys that start or end at transit stops.

“The mission is to work out how to make it work as a balanced system,” says Susan Shaheen, co-director of the Transportation Sustainability Research Centre at the University of California, Berkeley, who is helping to evaluate the projects. “Perhaps there is an opportunity to knit this together to create a synergistic relationship, rather than competitive.”

In Helsinki, the city is exploring a possible solution. It’s dubbed mobility-as-a-service and is led by the company MaaS Global, which pitches itself as the Netflix of transportation. Users download an app, Whim, and pay a monthly subscription fee, which grants access to a wide range of transport options. Passengers subscribing to the basic “Urban plan” are offered unlimited use of buses, trains and trams, plus subsidised taxis and car hire. Bike hire is set to be added soon.

On a brisk Friday morning in March, the streets of Helsinki were coated in snow. As a handful of swimmers bravely lowered themselves into an open-air pool by the harbour, I tapped an address two miles away into Whim; the app suggested I take the tram.

Twenty minutes later, I’d arrived. Route planning and ticketing is all handled within the app; you simply select you preferred transport option and validate tickets (like a digital version of punching a paper ticket) before departing. Over the next 36 hours, I used Whim several times, taking trips by tram, taxi and occasionally, at the app’s suggestion, navigating the frozen pavements on foot. Any payable fares are deducted from my account balance. It was a welcome change from the often challenging experience of paying for public transport in an unfamiliar city.

There have been technical glitches. “They shouldn’t roll out anything when there are so many crashes with the app,” says Topi Manu, a partner at a Helsinki design consultancy. But Taru Suojaranta, a political scientist, says Whim has saved her money: the basic plan is about €8 a month cheaper than a standard travel card. It’s also convenient, she says: “Now I have all the train tickets I can use, all in my phone.” 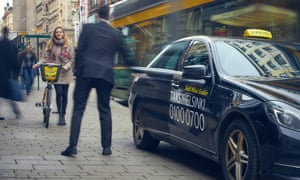 Crucially, the project seems to have the support of the city. Sami Sahala, project manager for Forum Virium, an innovation unit within the City of Helsinki, says: “I’m not sure everything has to be public transport. It can be something between public and private. That’s the direction we’re going in and mobility-as-a-service helps with that.”

MaaS Global claims early users of Whim increased the number of trips taken on public transport by over 50%, and that the loser was the private car. Co-founder Sampo Hietanen says his ultimate aim is to convince people to give up their cars altogether – which will require public and private operators working side by side. “No transport provider has enough supply density to provide the same service as owning a car,” he says. “If you want to tap into the 85% of the market owned by the car, the only way is to have everything combined.”

Whim arrives in the UK soon. A pilot scheme will launch on 3 April in the West Midlands, where Transport for West Midlands has helped convince partners, including National Express, to get on board. Chris Lane, head of innovation at Transport for West Midlands, says public agencies and private companies will both have a role to play in providing mass transit in the future. “The public sector is starting to recognise we can’t do it all ourselves,” he says, adding that he just has one request. “Talk to us, rather than just coming in and starting to do something,” he says. “In that case, you’re on your own.”