Home Company Car Fleet ‘If you don’t have someone dedicated to your fleet, God help you,’ says ICFM’s Paul Hollick

Fleet decision-makers and those with direct influence over policy and strategy have never faced such a jumble of complexity, confusion and rapid-paced change.

From once being responsible solely for managing cars, their focus migrated to managing the drivers in the 2000s, with the introduction of corporate manslaughter.

Now they are increasingly responsible for managing journeys, with the onset of mobility as a service and travel management overriding the traditional fleet management role.

It’s a multifaceted position, yet the responsibility for tackling a legion of decisions, legislations, processes and technologies falls to a person whose job is rarely acknowledged as a profession.

Weaving a policy that threads together all these developments, yet still considers the core fundamentals of right car/right person, driver behaviour, safety, environment and cost, is a skill that deserves recognition.

Enter ICFM. Formerly the Institute of Car Fleet Management, the not-for-profit training and accreditation body was launched in 1992 with a remit to raise the standards of fleet professionals.

Its existence is thanks, in part, to Fleet News. Following the publication of an article lamenting the lack of a recognised qualification for fleet managers, Peter Moxon, managing director of Emmox Vehicle Management, and Alan Myers, managing director of McKenzie Myers, came up with the idea of the Institute.

They reached out to several eminent fleet managers of the day, including Graham Sinclair, fleet director at White Arrow Group, Malcolm Richings, fleet manager at Granada Rentals UK, and Jim Barnett, fleet manager at Philips Electronics, drawing on their knowledge to design the constitution and structure of the ICFM.

“They all wanted to do something for the industry and started from scratch with no money, just with an idea to professionalise the industry,” says Peter Eldridge, ICFM director and company secretary who became a member in 1993.

“But they were fiery council meetings – all were heavyweights with big egos and big ideas. But they shared the same core objectives.”

Those objectives were – and are – twofold: to train newcomers to have the key skills to manage a fleet and to provide a progressive link to get them to an acceptable standard.

From modest roots, ICFM has built a reputation for delivering high quality training, all based on the same three core modules that were developed at launch: introductory, certificate and diploma.

“There was nothing else like it; and today there is still nothing else,” Eldridge adds. “Our certificate should be the minimum standard all fleet managers get to.” 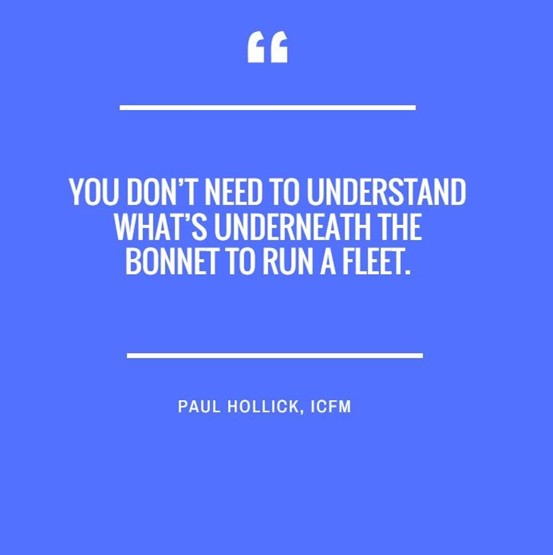 Current chairman Paul Hollick has set a goal of professionalising the fleet sector in much the same way as solicitors and accountants (as a former accountant, he should know).

“It’s also for the next generation,” he says. “They get best practice and they meet on our courses and go on a journey together. It becomes something that is bigger than them – it’s a circle of development in the industry.”

Since formation, ICFM has trained some 2,000 people and its courses are now oversubscribed. A landmark was reached in 2016 when ICFM trained more women than men. Hollick sees this as symptomatic of the changes within the sector.

“You don’t need to understand what’s underneath the bonnet to run a fleet,” he says. “It’s now about travel, occupational road risk, procurement, expenses – it’s more attractive to a wider range of people. We are also seeing more HR, procurement and finance people.”

Travel and mobility is the next area of development. As Hollick says: “For our members, it’s about having responsibility for all travel, not management of an asset.”

Member numbers used to fluctuate between 600 and 700, but over the past four years have risen to 900.

That’s thanks, in part, to a decision to widen the training pool to include leasing, manufacturer and dealer staff who want to better understand the fleet sector, particularly with the rise in outsourcing. However, fleet decision-makers remain the core, with the split around 60:40 in their favour.

Hollick’s short-term target is to pass 1,000 members; longer-term he wants 1,500-2,000. He would also like today’s diploma holders to become tomorrow’s trainers, but recognises there are challenges.

“The fleet industry is unusual. There is a lack of aspiration. They reach a certain level and then stop,” Hollick says.

Despite growing involvement of procurement, finance, and HR specialists – “we should have all as members of ICFM” – someone has to take ultimate responsibility for the fleet, Hollick adds. “Strategy has to be in-sourced.”

Never has this been more important than in the current climate of uncertainty, caused in no small part by the Government’s lack of planning, especially on BIK taxation.

Its policies have created confusion over diesel while there are few tangible alternatives for many fleet activities.

Also crucial is an understanding that partnerships and value-added relationships with suppliers elicit the best results, not purely price-driven contracts.

“Price is a hygiene factor; it’s the difference between best value and cheap,” Hollick says. “But best value is only an objective when you have someone within a business who understands fleet which is why procurement and fleet have to exist and work together.

“If they don’t, it doesn’t work and then you get hidden costs from making the wrong choices.

“Those that get it right, get it really right!”

ICFM training helps to ensure they get it right more often than not. And the qualifications are gaining traction in the sector. However, Hollick recognises that it is a constant battle to raise profile.

“We are still a best-kept secret, but we will get to be the standard as we grow,” he says. “That’s why inclusivity is important – everyone who touches fleet should be a member.

“Fleet is a five-year programme. You have to have a strategy for at least a cycle-and-a-half of your vehicle life. This is why it is important to have someone dedicated to looking after your fleet. If you don’t, God help you!”

The changing face of training

ICFM training and dissertations are all made relevant to the fleet manager’s own company.

In order to understand and problem-solve, they have to bridge the gap between the knowledge gained on the course and how that can be applied to their own fleet. Then they have to present back to
the group.

“It’s theory-based, steeped in real-life experience and deployment,” says Paul Hollick. “We always invite trainees to bring their boss with them when they collect their certificate.”

This engagement is important.

“The company is investing in its fleet manager and understands that it’s an achievement,” explains Hollick.

ICFM training is constantly evolving to take into consideration the changing fleet landscape. The organisation is also looking at making entry easier, considering app technology and bite-size learning rather than the commitment to eight days in a classroom.

“We will do more online, but we will always encourage classroom as a progression because of the group learning and interaction with the trainers and your peers,” says Peter Eldridge.