Ride-hailing services might seem like a money-saving alternative to buying a car for people who live in urban areas. But according to a new study, it’s not nearly as cost-effective as you’d think. Stock image

Ride-hailing services might seem like a money-saving alternative to buying a car for people who live in urban areas.

But according to a new study, it’s not nearly as cost-effective as you’d think.

The AAA Foundation for Traffic Safety found that using ride-hailing services like Lyft and Uber as a primary mode of transportation works out to be far more expensive than owning a car – even with fuel, insurance, parking, and the vehicle itself considered.

According to the new AAA study, relying on ride-hailing services could cost a person roughly $20,118 per year.

The study focuses on urban settings, which are the only practical environments where personal cars could be replaced with ride-hailing, AAA notes.

In urban areas, the average driver puts 10,841 miles on their car per year.

Even in cities with lower annual ride-hailing costs, such as Dallas, TX ($16,944), the expense is still much greater than the costs associated with car ownership.

‘Whether you own a vehicle or not, ride-hailing services are a convenient transportation option,’ said John Nielsen, managing director, Automotive Engineering and Repair.

‘However, with the average American city-dweller driving nearly 11,000 miles per year, a personal vehicle is still the more cost-effective choice.’ 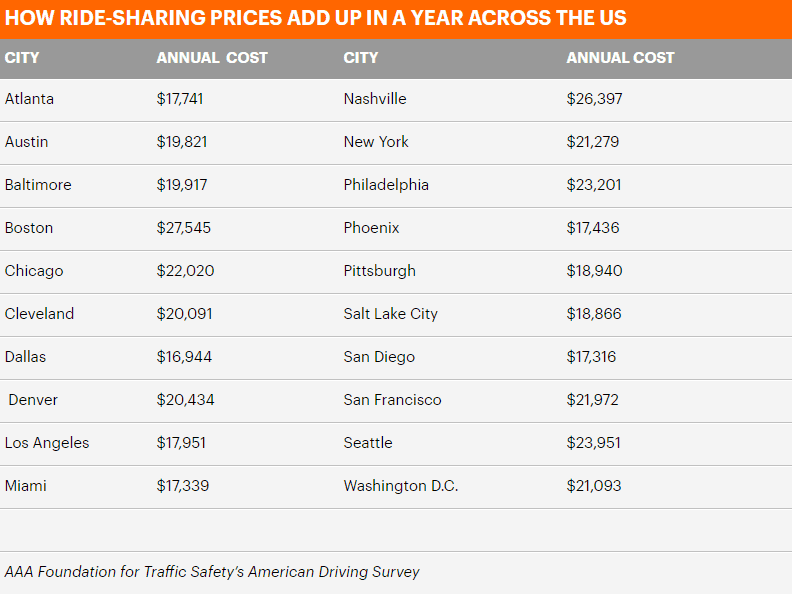 In some major urban areas, the estimated annual costs for people who rely on ride-hailing services are staggering.

Parking is one area that can be a killer when it comes to cost; according to the AAA estimates, this costs anywhere from $706 (Phoenix) to $8,088 (New York) per year.

But, even with this expense considered, using ride-hailing services was found to be the more costly option.

For those lucky enough to have access to free parking, the use of ride-hailing services works out to be almost three times as expensive as vehicle ownership.

‘For those who travel a very limited number of miles annually, or have mobility issues that prevent them from driving a personal vehicle, ride-hailing can be a viable and important option,’ Nielsen said.

‘But, for everyone else: the car is still king.’

View original post. We are in the midst of an urban revolution, nothing less. …