VW announced today the deployment of what could be one of the largest all-electric car fleets through its new ‘We Share‘ car sharing service.

Berlin is going to be the first city to get the service and it will start with a fleet of 2,000 electric cars.
VW’s electric vehicles are already being used in third-party car-sharing services. For example, Zipcar is building a fleet of over 300 all-electric VW e-Golfs to be available for a car-sharing in London.

But now they want to develop their own service.

Volkswagen said that they will start with 1,500 e-Golf electric cars to launch the service during the second quarter of 2019 and 500 e-up! will follow “later”.

Jürgen Stackmann, Volkswagen Brand Board Member for Sales, commented on the announcement:

“Because of the size and density of its population, Berlin is the ideal market and has the greatest potential. Many people who have already tested car sharing live there – and the numbers keep on growing. We are democratizing e-mobility. From 2020, ’We Share’ is to support the market introduction of the new generation of our new, all-electric I.D. models and thus make a significant contribution to the Volkswagen brand’s e-mobility offensive.”

Indeed, it sounds like the e-Golf and e-up! are only placeholders for the all-electric I.D. models which will “gradually replace” them in the fleet starting in 2020.

The I.D. Concept electric vehicle is the first to come to market and it is supposed to have a NEDC-rated range of “400 to 600 km” (~250 to 375 miles) depending on the battery pack configuration and autonomous driving capacity. 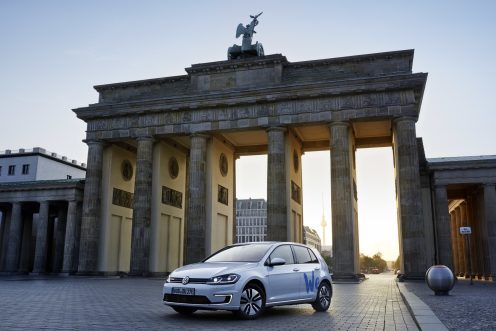 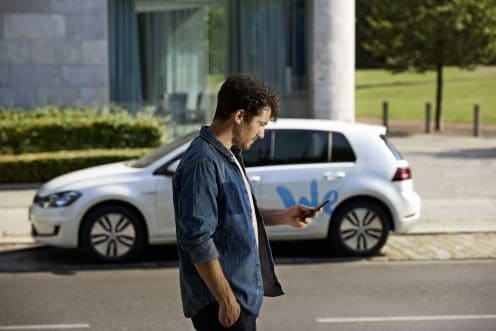 As with other car sharing services, users will be able to access the vehicles through a mobile app and pay based on their usage.

VW says that they also have plans for other major cities in Germany and other European and North American markets starting in 2020.

They say that the focus will be on “cities with a population of over one million.”

I think those kinds of fleets are going to have a significant impact – both to introduce people to electric vehicles but also as a direct reduction of emissions.

It’s the first step toward a fully autonomous and electric ride-hailing service, which is expected to significantly reduce the cost of travel per mile and overall car ownership.

For example, a study showed that a ride in a hypothetical self-driving Tesla Model 3 on ‘Tesla Network’ could end up costing only ~$0.60 per mile.

That is significantly less than any other ride-hailing or car-sharing service in the same market and it is even competitive with private car ownership.

It’s also significantly cheaper than car sharing, but the service is still a step in that direction and it looks like VW wants to have the infrastructure in place to be ready when autonomous vehicles will be too.

View original post. The sentence “we are not alone” may seem more real in …