Home News Smart Cities The future will be dockless: could a city really run on ‘floating transport’?

The transport app Citymapper now includes ‘floating transport’ such as dockless bicycles in its journey plans. Photograph: Christopher Thomond for the Guardian

Citymapper now supports dockless transport options such as Ofo bikes in London and San Francisco’s Bird electric scooters, offering an insight into the future of transport in cities.

Last week, London-based transportation app Citymapper coined a new phrase: “floating transport”. “It has no set stops or infrastructure,” the company explained, “and it’s filling a mobility gap in our cities.”

It’s a useful shorthand to lump together everything from dockless cycle hire, like Ofo and Mobike’s London offerings, Bird and Lime’s San Franciscan electric scooters, to Daimler’s short-term car hire service Car2Go – all of which are now supported by Citymapper’s app, alongside fixed urban transport options like buses and trains.

These services rely on a combination of GPS and cellular connectivity to track whichever vehicle is being rented, charging users by the minute and immobilising the device wherever it is left at the end of its trip. They’ve exploded in popularity this year, riding the wave of trends like declining car ownership and increasing preference for renting rather than owning outright.

These transport systems are quickly becoming ubiquitous – but what role can they play in the cities of tomorrow? The update to Citymapper offers an insight only if the kinks can be worked out – and it’s both more and less transformative than we might hope.

Floating transport has obvious appeal to investors, especially those sore to have missed out on the Uber gravy train. Venture capitalists’ enthusiasm to jump on the next big thing in transport is the best explanation for the astounding US $300m (£226m) raised by scooter company Bird, at a valuation of $1.7bn, last month. That was matched this week by Uber and Google’s investment in Bird competitor Lime at a $1.1bn valuation, as the company rolls out (sorry) its bright green scooters to Paris, entering Europe for the first time

Unlike precursors such as docked cycle hire, or fixed-parking car hire (think Zipcar), the initial outlay is very small. There’s no need to build docks or pay cities for permanent parking spaces, and while demand remains high, the numbers are good – really, really good.

A Bird scooter, for instance, will conservatively gross about $10 a day, according to Bloomberg’s Brad Stone. That’s five short rides, give or take. The scooter needs to be recharged – a job done by gig economy contractors who are paid $5 per recharged scooter – so the net profit per day is $5. With those figures, a $300 scooter with $50 worth of modifications including the GPS tracker and locking mechanisms, then pays for itself in two months.

But simply being profitable doesn’t necessarily mean floating transport is good for a city, and the growth of the sector has been a bumpy ride. A big problem is that pavement is a shared space, and a limited resource. The overcrowding problems San Francisco has seen with Bird scooters are mirrored in London by Ofo bikes – a model where users abandon their vehicles wherever they want inevitably results in pavements littered with out-of-service rides.

That can be annoying, unsightly or actively dangerous, depending on the circumstances. In London, parents have complained of having to push prams onto the road to get round piles of bikes, while wheelchair users in LA can find a previously accessible route blocked by a wayward scooters.

While floating transport is free from many of the regulatory burdens faced by previous transport startups, it’s not immune. Electric scooters, for instance, can’t easily expand to the UK, because they aren’t legal to use on the road or the pavement. Dockless cycle hire faces similar trouble in Australia, where helmets are required by law.

Citymapper is betting, though, that despite hurdles on a regional level, this is the future globally. The app currently has a slim level of integration with most floating transport providers – individual bikes, cars and scooters will appear on the map, along with information like charge level. But they aren’t yet seamlessly combined with the company’s flagship multi-modal journey planner.

When that does happen, as Citymapper has said, the services will be presented like any other mode of transport. If it’s quicker to hop on an Ofo bike and cycle to the tube than it is to wait for a bus, it will show as an option. 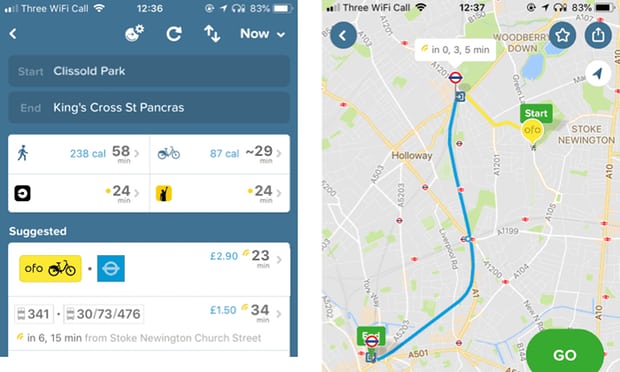 But the company’s mock-up of how it might look in the app– showing a notional journey from transport-deprived Stoke Newington, in north-east London – conceals some of the potential flaws of floating transport. It’s easy enough to plan a journey that begins with a three-minute walk to a bike and ends with 30 minutes on the tube, but it’s somewhat harder to plan your return trip. Will the bike still be there? Or would you have been better off taking an entirely different route in the first place? (That’s not a hypothetical concern – it has happened to me a few times. It’s worse still when you arrive at a bike you’d intended to use to find it still there but not actually working, because it hasn’t yet been reported and removed from the map.)

Floating transport also faces similar problems to those that docked cycle hire discovered in its early years: individuals’ movement through cities is highly correlated. Rush hour is the obvious example, but other trends become clear if you spend long enough staring at data visualisations of where, say, London’s Santander bikes are at any given time. Try to find a docking space outside Hackney’s Victoria Park at 1pm on a sunny summer Saturday, and eight hours later, you’ll have just as hard a time trying to find a bike to get home with.

Now imagine trying to solve that problem without docks where would-be renters can at least wait in the hope that a bike will be dropped off.

Many floating transport providers have realised these potential pitfalls, and are taking steps to address them. Some bike providers, for instance, have followed the lead of London’s cycle hire network, and now collect bikes left in out-of-the-way places and drop them near transport hubs. Jump, an e-bike provider now owned by Uber, lets users “preorder” bikes, renting them in advance (and still paying by the minute) to ensure they’re there when they need them.

And of course, smart transport planners play their own part. If we could give ourselves over fully to Citymapper and its ilk, religiously following instructions to the letter even on journeys which we think we know, then the app could merrily reroute as and when the circumstances on the ground change, diverting users towards bikes that have suddenly appeared for rent, or telling them to hop on a bus if someone’s beaten you to a scooter.

But ultimately, floating transport is going to have to learn another lesson that conventional transportation bodies have taken to heart: flexible may be fun, but cities run on reliable.

View original post. Cities are starting to see a vertical integration of the Mobility …