We are in the midst of an urban revolution, nothing less. It’s challenging for us to observe it and define it as such, being only human. With our short lifespans and even shorter-term memories. The signs of a revolution are already here. Scarce, subtle and slow as they may be.

The city is primarily a product of transportation. It has always been one. The size of the city and the width of the streets, everything is constantly adapting to the way we move. Even the height of buildings in the city is related to transportation, and was limited to four floors before the invention of the safety elevator – The most popular public, electric, autonomous and free transport vehicle in the world. 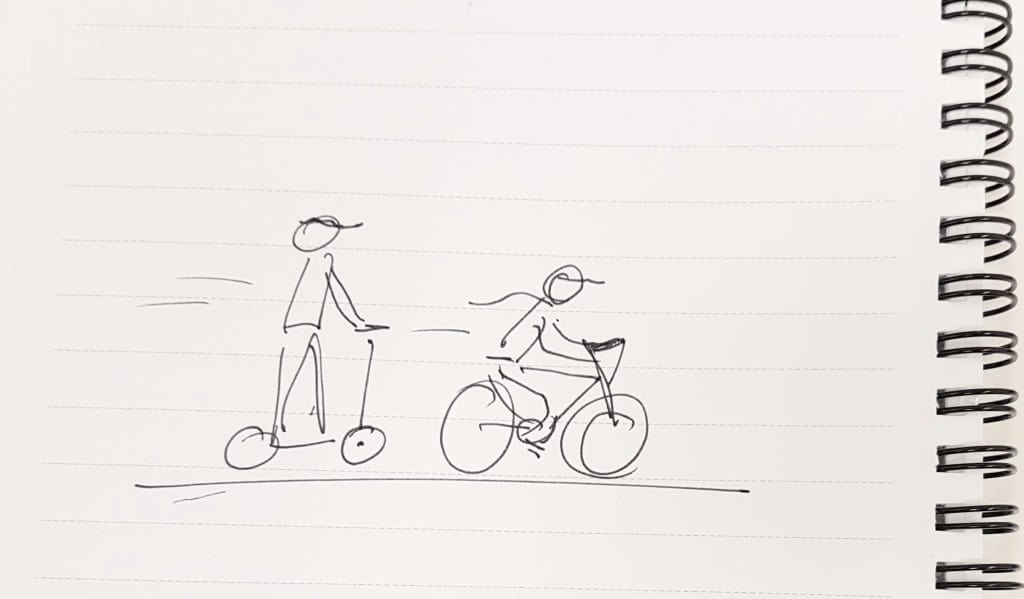 When the Segway was invented, its inventor thought that by using this vehicle, which is licensed for sidewalks, the way people are experiencing the city will change. It didn’t happen. But now a number of technological means have matured and electric bicycles have become a vehicle with enormous advantages. With no need for a license, insurance, zero fuel costs and a low price point, bikes and electric scooters are becoming the vehicle that really can replace the car for short urban traffic. Unlike with regular bikes, the electric bike rider sees no obstacle in steep climbs, hot days or long distances. Those bikes are a very convenient means of transportation if you are commuting to work at a distance of 5 to 15 kilometers.

We are only on the first steps of the urban revolution. It seems as if nothing  has changed with the increased usage of said bikes but their related accidents. That was also the case when the car was introduced to the cities. People demanded that every car will be led by a man walking in front of it with a warning flag in hand. The car frightened both horses and pedestrians and claimed road rights. The public was furious, articles were written and demands were made to prevent cars from entering the city… sounds familiar?

Whether the city is mountainous or flat, whether it has bicycle lanes or not, cities are being taken over by electric bikes and scooters. They are everywhere, interfering both on roads and sidewalks in ways that overwhelm city planners, architects and legislators.

The statistics reported in the Israeli parliament (2018) were: 210 thousand electric bicycles on roads and sidewalks, 76 deaths in 3 years, and zero legislation. Well, I’ve got some bad news, no effective legislation will be possible in the near future. It is a process that will take years, during which both the law and city planners will follow the current state of affairs and inevitably fall behind trying to balance interests. Any attempt made today to allocate driving or parking lanes for those small vehicles will encounter great opposition as well as come at a great risk to politicians and mayors.

But it’s only temporary.

The change begins with main intersections where cyclists fly through in all directions while cars hesitate to move in fear for the cyclists’ lives. As usual, with no other choice available, some cities are barring cars from entering their city centers. A Slow but persistent change. Any closure of a car lane makes it less attractive to drive. Already in most large cities, cycling is faster than a taxi ride (study in New York). It is a mechanism that accelerates itself the moment you begin to comply with it. The more you accommodate for the cyclists, the less choice there is but to limit cars further. All of that is happening even before cyclists reached “security in large numbers” – the status where there are so many of them that the entire transportation system adapts to them and the rides become significantly safer.

One thing is clear today – bicycle lanes on the sidewalk are not the solution. The combination of fast bikes with pedestrians is not only dangerous but also problematic at the intersections with cars. Only paths that take off parts of the road can really become a valid traffic network, and examples for those are emerging in London, Paris and other big cities.

In all cities of the world, for the next twenty years, city centers will be facing a major shift. 20 years is the time it took the car to change the urban perception. It took the city 50 years to adjust to them and give in completely. I would suggest my fellow architects and city planners to rethink their urban perception. How many cars does an urban family need? What is the width of the required roads? What separation should be maintained between pedestrians and other means of transportation?

Moreover – a cyclist is a creature that we architects and planners hardly know. The pedestrian is familiar to us. For example, he walks at a pace that is slow enough to stop and enter a store spontaneously. The driver in his car is also known to us. We know that he is limited to a narrow cone of vision and does not even see the display window. We know how to plan for either, but the cyclist lives in the middle range. He can stop anywhere as a pedestrian but moves at a relatively high speed, he turns using a small radius like a pedestrian yet is in need of a parking space. What is the size of block that suits it? What size of parking should we supply him with and how far from his destination?

The problem is that we do not really know what is going to be more successful and what will fail. For example, have a look at Google Image search for “bike graveyards” to understand one urban problem bicycles, and especially bicycle rental services, can raise. At the beginning of the 20th century the city was a literally stinking place. Horses manure and horses cadavers were left in the street until the municipal veterinarian cleared them out. We may find ourselves in the same situation again. With metal bodies of bicycles and batteries polluting every street corner.

Similarly to previous urban revolutions, we are facing the unexpected. There will be mistakes made, people will be injured and even killed until the city will adapt. Cars are likely to stay with us forever. It seems that electric bikes and riders will need a license and insurance, and it is likely that the entire urban space will change for the worse before it can change for the better.

We live too little to remember a city other than the one that exists now, a city polluted with car smoke and segmented with fences between road lanes. These small electric transportation means are going to drag us all to new type of city. Whether we like it or not, whether we understand it or not.

When Elisha Otis introduced the safety elevator at 1852, he never imagined skyscrapers.

John is the current chairman of the ACFO. ACFO is the UK’s premier representative …